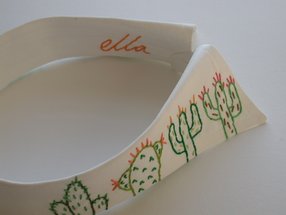 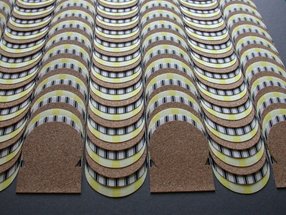 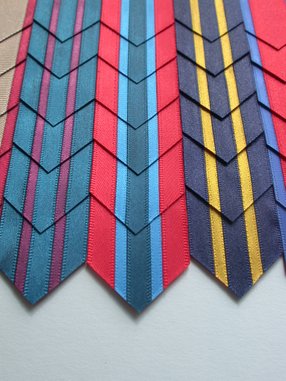 Ella was born in Brighton (UK) in 1984. Her passion for art was first realised during experimental art lessons, where numerous found materials were used; ring pulls from drinks cans, large pieces of wood found in skips, scraps of materials and ribbon. She found it more exciting and inspiring to work three-dimensionally with materials, discovering their unique properties, rather than to paint or draw.

Ella’s current practice is separated into two main areas; Decorative Objects and Collections. Decorative Objects are colourfully stitched or wrapped wooden pieces (either found or drift wood), whilst Collections are box-framed artworks featuring a wide variety of found and beachcombed items (including beach plastics, lighters and ceramics, ordered by colour or by size). Inspired by the mood of the British coast, with palettes reminiscent of street art and graffiti, these artworks exploit her passion for colour, collecting and graphic pattern.

Ella sells through her own stands at craft fairs, trade shows, exhibitions and through selected galleries in the UK (such as Flow in Notting Hill and MOSTYN Shop in Wales). ABC Home in New York sell her smaller scale stitched Decorative Objects, including pieces from the Weather Series, Beach Huts and Driftwood Hearts.

A large element of Ella's practice involves planning and leading workshops, either based on her own work (focusing on the materials and techniques she employs) or a set theme.

Since 2015 Ella has been the Lead Artist for three Bow Arts school projects in London. Most recently she completed a memorial artwork installation at Ben Jonson Primary School, designed and created with students to celebrate former pupil, Alfred George Drake, who was awarded the Victoria Cross in 1915.

Ella also lectures on her practice, most recently to the BA Textiles course at University Bournemouth and the Oxford Embroiderers’ Guild.

Ella has exhibited nationally and internationally (in America, South Korea, Hong Kong, Poland, France, Italy and Germany). Her most important exhibitions to date have been Talking Textiles at Ventura Lambrate, Milan (during Salone del Mobile), Driftwood at Magazin (Munich), Colour Coded at Weston Park Museum in Sheffield, Origin and 6 Hands at The Aram Gallery, both in London. In January 2016 she exhibited at CRAFT (Top Drawer), at Olympia, London, her first trade show.

Between March 2013 and March 2014 she had a large number of driftwood artworks on display in the Reception area of the InterContinental Seoul COEX Hotel, South Korea. This was to coincide with being their Guest Artist for 2013 and her collaboration with the design team on wedding stationery.

Ella has work in private collections, has undertaken numerous private and public commissions and has had work purchased by the Crafts Council.

Since graduating from her MA in 2009 Ella has worked on freelance projects and commissions. Her most grand project to date was the creation of four Simple Shapes artworks for the Market Café of the P&O Britannia cruise ship (which set sail from Southampton in March 2015). In late 2012 she travelled to South Korea to collaborate on wedding stationery designs for the InterContinental Seoul COEX Hotel.

Ella studied Multi Media Textiles at Loughborough University, where the principles of re-use and the embracing of the everyday were encouraged. Here too began her love of combining vibrant colours with striped imagery.

After graduation Ella was selected by Texprint as one of the best 24 graduating textile designers in the UK, going on to exhibit in Paris and Hong Kong, and was awarded the Texprint “Colour Prize”. As a result of this, she then spent three months in Como, Italy, undertaking an internship in Product Finishing at Ratti, an international luxury textiles company.

From 2007 to 2009 she undertook a Master’s Degree in Mixed Media Textiles at the Royal College of Art, London. Her summer show featured the more concluded and larger-scale results of one year’s experimentation with both bought and drift wood. This was used in conjunction with purchased materials such as rayon thread, stranded cotton, and plastic tubing to create vibrant Decorative Objects and sculptural pieces.

Whilst studying at the Royal College, Ella came third in the 2009 Man Group Drawing Prize with examples of her embroidered driftwood pieces, and was awarded The Worshipful Company of Dyers’ Travel Bursary in 2008. Ella used the bursary to travel to New York to research street art and graffiti. Most recently she was an exhibitor at Peanut Butter Tree Arts, which was voted "Best Artists Open House" during Brighton and Hove’s Artists Open Houses in summer 2014.